Harry Potter and the Prisioner of Azkaban Bridge Sequence Analysis

We are going to “read” the wonderful bridge scene in Harry Potter and the Prisoner of Azkaban (Alfonso Cuarón, 2004). Being considered the best film in the whole saga by many hardcore followers of the boy wizard’s aventures, we are gonna dive deep into the magic behind one of the film’s most loved sequences from a technical point of view.

Thanks to the incredible screenplay written by Steve Kloves, the viewer already knows and has connected with the two main characters in the scene. In one side we have Professor Lupin (the always great David Thewlis), a bright soul with a dark secret. He is used as some kind of paternal figure for Harry (Daniel Radcliffe), the other main character whose look for his identity works as a main theme for both the scene and the film. But how do the filmmakers represent that feeling?

We are gonna start our analysis with the camera work. There’s only four shots composing the scene, that starts in the Hogwarts Clock Tower Courtyard. The other characters leave the castle heading for a day trip, although Harry is not allowed. They leave him alone, just when the clock hits the hour and a (probably digital) owl flies just above him. It’s a wide moving shot that works perfectly with the clock used as the transition. The dialogue starts, followed by a long establishing wide shot that shows the bridge located in the Scottish Highlands. The main two characters are in the middle of it.

Shot 1 - Transition from the scene before in the Clock Tower 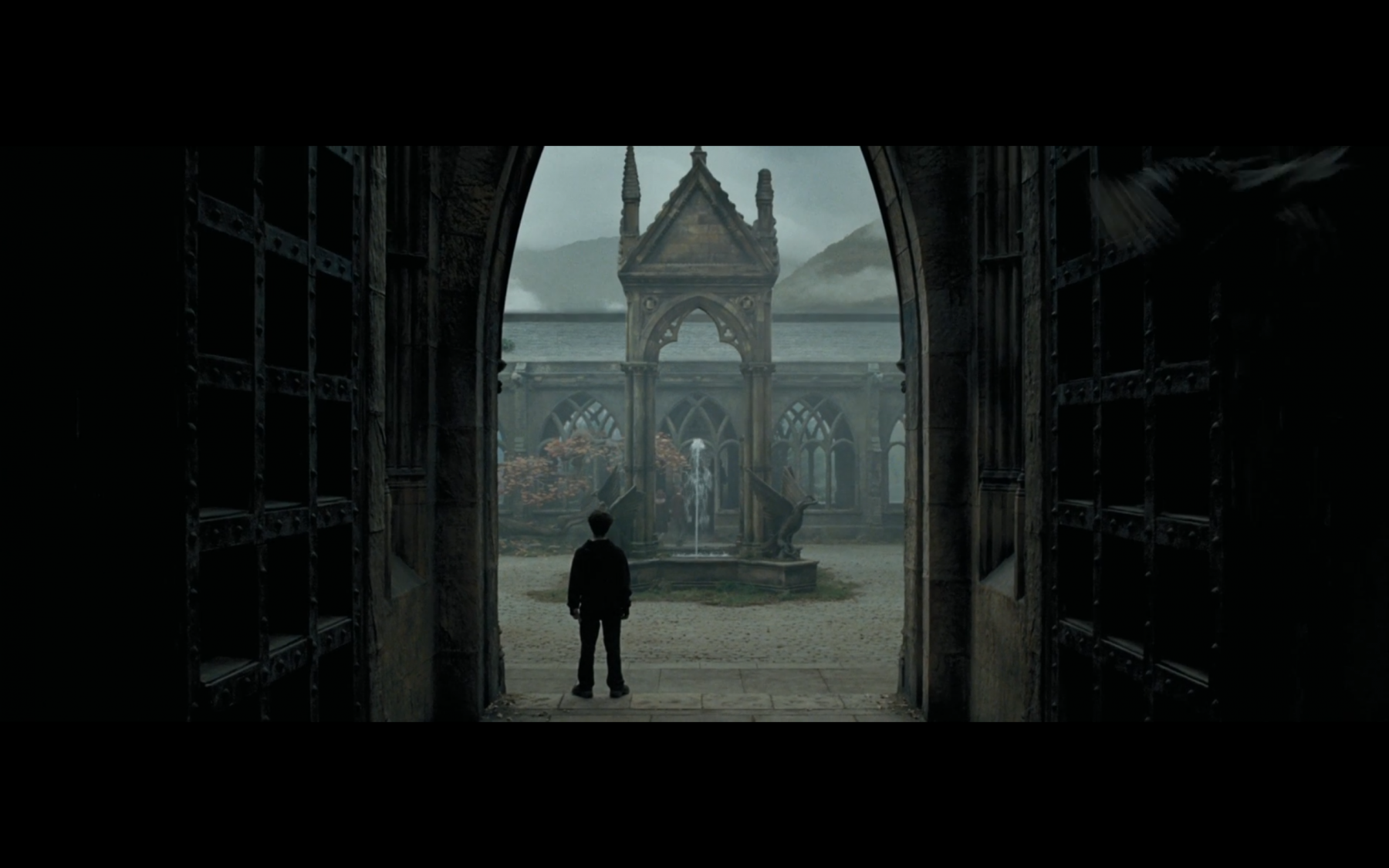 Next we have a perfect example of the magic of film. In only one long shot beautifly blocked with three actor positions and three camera points, the action takes place. For the first fifty seconds the camera is static in a medium shot, while they talk about the traumas Harry has encountered recently. With the mention of Lily, someone very important for both of them, Lupin moves turning his back to the viewer. The camera movement starts then, centering the viewer’s attention on Harry. He’s hearing about his dead mother for the first time. John William’s magical soundtrack (non-diegetic music) starts too, creating a genuine emotion while we get to the close-up. When the professor speaks about Harry’s father, we are in the high moment of emotion. The Lupin turns his back, comes back closer than before to Harry. The movement gives us a brief medium shot of the two of them together, the start of a bond between a kid and a friend/mentor that will continue during the film series.

Then we go back to the wide establishing shot that works as the transition, giving the viewer a couple seconds to process the weight of all the established before.

But not only we are gonna talk about Michael Seresin fantastic photography. There’s also the production design, leaded by Oscar winner Stuart Craig. There’s the bridge set, where the gothic arcs work perfectly with the Hogwarts design established in the previous moments. The location, Glencoe, adds an special personality to the film and the world it is based on, sound effects as the clock in the beginning or the owls in the back make it feel real, and even the costume design says a lot about the hidden darkness in both characters.

To conclude, Harry Potter and the Prisoner of Azkaban is an incredible work of artisanal craft, even for a Hollywood blockbuster. The director Alfonso Cuarón not only delivers a film about magic, hipogriffs and werewolves. He gives us a story about a 13 year old kid who is discovering his place in the world, also a nice metaphor of puberty. And he does it surrounded by some of the best professionals in the British film industry and an exceptional attention to each small detail.

Really pleased to share the first preview from the

Sunset with the 💩 #edinburgh #scotland #photogr

Just some wee pictures I took this morning for #ed

Just some test for the short-film "About a difficu

Thanks for the most amazing weekend of 2021 @yolin

How couldn't I be in love with this city? #edinbur

Theme by Anders Norén — Up ↑